Part of a new series of instructional Calligraphy DVDs from Reggie Ezell. For beginning and intermediate students. Video is approximately 60 minutes and covers "all aspects" of the topic. Reggie has taught calligraphy for over 30 years, and his yearlong courses have been among the most highly regarded and sought after in the U.S. and Canada. This DVD is formatted for North American DVD players. See B4070 for tinstructional portfolios that can be used with these DVDs.

The reduced quantity price is for any assortment of DVDs in the series. 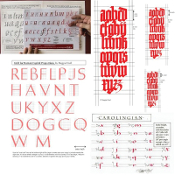