First published in 1995, Cover to Cover helped launch many of us into the craft of making books by hand. This beautiful 20th anniversary edition can do the same for you with its foundational, step-by-step instructions. It explains all the basics and shows how to create, fold, assemble, and stitch a range of books and journals, from simple pamphlets to accordion-folded signatures, using a variety of materials. Shereen LaPlantz was the founder of the magazine Bound & Lettered. 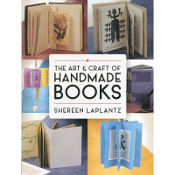