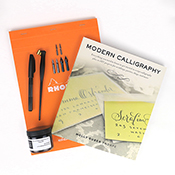 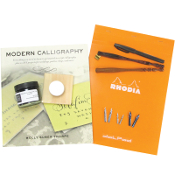 Write a review
Very useful reference!
Feb 19, 2017  |  By jhynny
I've been hand lettering for a while and just started feeling like working with oblique pen in modern style. This is just right book to go with. It has various styles of each letter of alphabet and led me on the track right away.

Modern Calligraphy
Jan 2, 2022  |  By Elizabeth Gadus
I bought the book hoping to get some incite into Modern, bounce calligraphy. As a seasoned calligrapher of over 30 years I was really expecting more than what Ms. Thorpe provided. The book basically teaches basic script skills which I have. She provides information on various watercolor technique for using it as ink, but little detail about how to do a bounce type lettering which is so popular, In short. the book is very photo pleasant showing various ideas, but does not show how to do the writing itself. I was not impressed and would not suggest this book if you are looking for " Modern Calligraphy".
Owner Response: I am sorry that Modern Calligraphy did not fit your needs. It was a pioneering book that introduced the concept that pointed pen script does not have to be formal Copperplate. Scribes then ran with that idea and soon the kind of bouncy, informal script that is called Modern Calligraphy was born, and it has become wildly popular. Since the book Modern Calligraphy was published prior to current concept of the script Modern Calligraphy, the title can be misleading. Molly Super Thorpe's new book Mastering Modern Calligraphy provides examples of various Modern Calligraphy styles, some bounce, others do not, some are vertical, others slanted. Model alphabets are shown for each and some examples of letter joins and words, but there is not in depth instruction on any of the hands.